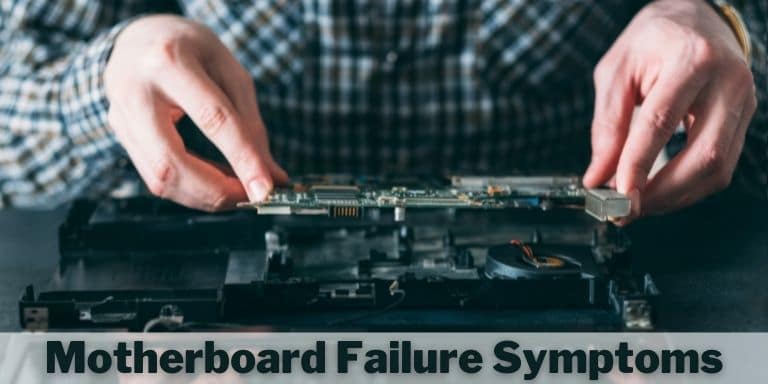 A motherboard or mobo (as they say) is that large circuit board inside a computer where all the computer components connect to.

So this means that all the parts involved in intensive computing are in direct connection with this piece of hardware.

Long story short, this connectivity might cause problems for the motherboard in the long run; for it may encounter any incompatible connection.

And that’s where you have to keep an eye on the motherboard failure symptoms to avoid serious consequences.

Here we have penned down some of the major signs that depict motherboard problems and hence alarm you before it’s too late.

So without further delay, let’s get down to it:

5 Signs of a Failing Motherboard

Using your computer with a faulty motherboard is not a smooth experience. You’ll be facing a lot of glitches and interruptions in performance. And for a fact, these lacks in operation are the symptoms of a dying motherboard.

Related: How to Test a Motherboard With a Multimeter

So let’s figure out these:

1. Look for the Physical Damage:

The first and foremost sign that you can guess of to recognize the failure of a motherboard is its physical damage. At times, the components of a motherboard are damaged and cause it to a gradual death.

So, one of the major aspects that are to be considered to avoid the complete failure of a motherboard is to timely check its capacitors, transistors, or circuits. If any of these are burned or bloated out, then there is a great chance of complete motherboard failure.

With that said, this visual check will help you to diagnose the problem and then find a better solution to this. For instance, replacing a burned capacitor is possible under certain conditions.

So conclusively, you can avoid major mishaps by keeping an eye on the physical ability of the motherboard.

If the ventilation system of your computer isn’t in action, then you need to turn your PC off immediately. To put it simple, if your PC emits a burning smell out of over-heating, then chances are that there might occur a short-circuit.

For this reason, that motherboard provides a connection to many other components as well. So if any of these connections turn out to be incompatible with the system, then there is a chance of a short-circuit problem.

One of the most common signs of a dying motherboard is the frequent turn up of a blue screen. If your PC screen turns blue out of nowhere, every time you are indulged in intensive computing, then there can be a hardware problem.

Not that it is only the reaction of a faulty motherboard that a Blue Screen of Death shows up. Chances are that there could be any other possible reason too. So to figure out the cause behind it, you can simply Google the error code and find out where the problem lies.

Another sign that your computer’s most important piece of hardware is near to death is the random rebooting of the system. Nevertheless, this problem has a lot of other causes as well, despite the motherboard damage.

So you have to first make sure whether these reboots are powered by motherboard issues or something else.

If your screen randomly freezes or the programs take extra time than usual to load, then you need to check for the following factors:

Firstly, it might be due to some kind of problem with your computer’s software. Either you’ve downloaded malware lately, or else you need to run a virus check. Once you’ve checked all of this, but the problem remains, then for sure it’s the faulty motherboard.

How to Troubleshoot Motherboard Problems? A Quick Guide

There are two main categories to troubleshoot a motherboard. The first one is to check whether your computer reboots after running the diagnostic test i.e. POST. It will make sure that all the essential peripherals of your PC are connected and working.

While, the second category inspects the failure of the system to reboot itself, or undergo the POST analysis. That’s where you have to be more cautious about the hardware as the former would have meant the software issue more.

1. How to tell if your motherboard is dying?

A problematic motherboard is quite difficult to figure out, as it might be confused with the faults of other parts of the computer. However, certain symptoms could determine your dying motherboard.

Some of these symptoms include the Blue Screen of Death, over-heating or burning odor, frozen screens, beep noises, and many others.

2. What happens if a motherboard fails?

The motherboard is the most crucial piece of hardware in a computer. So a dead motherboard implies a dead computer! It could be that the fans, drives, and other peripherals keep on spinning, but there would be no activity once you turn the PC on.

There can be several reasons for a motherboard failure. But overheating tops all of them. Due to this, the built-in components of this piece of hardware might get affected and so it may turn out to be a faulty motherboard.

Other than that, the incompatible connections of other components, electrical spikes and power surges, and improper cable connections can be the possible reasons behind the failure of a motherboard.

4. Can you fix a dead motherboard?

A dead motherboard can be fixed and brought back to shape, provided that a professional handles it. You can either take it to the manufacturers if it’s under warranty or else to a repair shop, to help you diagnose and fix motherboard problems.

5. What is the lifespan of a motherboard?

There isn’t any specified lifespan of a motherboard that it can live up to this time or more. For heavy-duty, maintained hardware, it can go up to 7 to 10 years. While some of the motherboards might last 3 to 5 years or so.

It all comes down to how you treat this piece of hardware. If you keep taking enough precautionary measures to prevent any kind of motherboard damage, then it could last longer than you may expect.

Just like the CPU is the brain of the computer, a motherboard is said to be the heart of a computer.

So to keep it safe from damage and avoid all the reasons that would lead to a dying motherboard, you have to put a stop to all the causes right in the beginning.

Therefore, we have listed all the major signs that would depict a faulty motherboard. So better go through all of this and learn all the hardware problems before time.