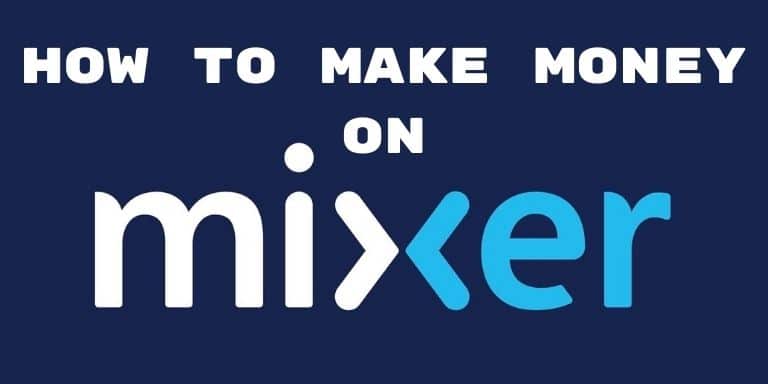 Mixer is a streaming platform that Microsoft initially brought out as Beam and later got it converted into what it is today. Besides, it is similar to that of the other live streaming platforms like YouTube and Twitch.

Now, why am I just putting up all of this? Well, this invention in the streaming industry has leveled up the game for amateurs. In fact, it is a great service that most of the streamers are trying to get involved with.

However, people ask a quite reasonable question here: how to make money on Mixer? And to answer this comprehensively, we have put together this amazing guide for you.

So make sure to read it till the end and learn the epic ways to get paid on Mixer. Here we go:

What Does it Take to Make Money on Mixer?

Now here we have five possible ways that you can opt to ace Mixer monetization of your stream. It’d help you know how you can make an income out of this video streaming platform.

That said, let’s get right into it:

It may sound absurd, but asking for donations is not like literally begging people to help you get money. Rather it is a healthy way to make an income out of your streams on Mixer and grow a community as well.

And it all goes like this: all you’re supposed to do is ask your followers to give you money for the content you’ve been creating. In return, you would have to give them some extra perks for their good turn; that can be a shout-out, merchandise, or even access to private chat.

With that being said, the procedure you’d be adopting to conduct this operation should be via a third-party service. For instance, many Mixer streamers opt for Patreon to raise money in this regard.

Streaming on Mixer is similar to YT and Twitch streaming as it also enables you to get sponsorship offers. However, getting sponsored is, by no means, a piece of cake.

You have got to invest a lot of effort, time, and a little bit of patience to make your video streaming sponsored by different brands. Once you get that taped, you can get paid out of it.

But to catch the eye of the high-end sponsors, you have to create impeccable content and make sure that you are eligible to get featured by the potential sponsors out there.

Whatever you may do, making money is directly related to your following, and eventually, it all comes down to how you grab the audience’s attention. So the first step in this regard is to keep your content specific, relevant, and above all, entertaining.

In addition to that, you can also work on improving your streaming gear as well. For instance, upgrading the mic or webcam would bring a huge change in the quality of the content.

Apart from that, you can easily get noticed by interacting with the audience. It will help you gain a following and play its role in building your fanbase as well.

Another important yet rarely-opted method to get paid on Mixer is adding affiliate links in your videos or live streams. By doing so, you can refer your audience to direct purchases and, in return, make an income out of the commission via their purchases.

So, on the whole, this can be a good enough option for those who know a few branding techniques. The little you can do is promote the brand product and convince your audience to purchase through this link. And that’s it!

However, ensure that you go through the Mixer affiliate requirements before adding affiliate links to avoid any inconvenience.

Here comes the most amazing and somehow futuristic approach to earn from this streaming platform. You have to meet all the Mixer partnership requirements to become a partner and get it straight shooting!

With that being said, down below is the basic criteria to qualify for Mixer partnership. Let’s have a look:

That said, you won’t be able to get the Mixer partnership without meeting these requirements.

On that note, let’s have a recap of all that we’ve mentioned above. Starting from the first method of asking for donations, to getting sponsorship and viewership, adding affiliate links, and becoming Mixer partner, all the payment methods are quite suitable for amateurs out there.

What does it take to be a mixer partner?

The minimum criterion to become a Mixer partner is that an account must have around 2000 followers with almost 12 or more days per month streaming record. In addition to that, the account must also be two months old at least to qualify for being a mixer partner.

How much money do mixer streamers make?

The exact amount can be varied from game to game. But to have an overview in that regard, the Mixer partners can earn 5% for every game, which users buy from either directly by streaming or through the channel.

How many followers do you need to make money on the mixer?

For minimum, the criteria of viewership, your Mixer account must be followed by at least 2000 people. Only then you’d be able to make money out of your streams.

How do mixers make money without being a partner?

There are several methods to be adopted to earn money from Mixer, aside from becoming its partner. As in, you can build your fanbase and grow your online community, be involved in affiliate marketing, asking for donations, and many more.

How much do mixer streamers make?

The amount of money you can make out of Mixer streaming is highly dependent on how much you are being followed. However, to give an overview in this regard, Mixer streamers get paid in their particular currencies, i.e., Embers and Skills. For each Ember, a streamer gets $0.01.

The Mixer has taken over the streaming industry by storm in the past few years.

However, making money on this platform is not like a walk in the park. It requires an ample amount of effort, at the right time, in the right direction!

So learn all the possible hacks that would help you grow your income digits to six and more via Mixer streaming.