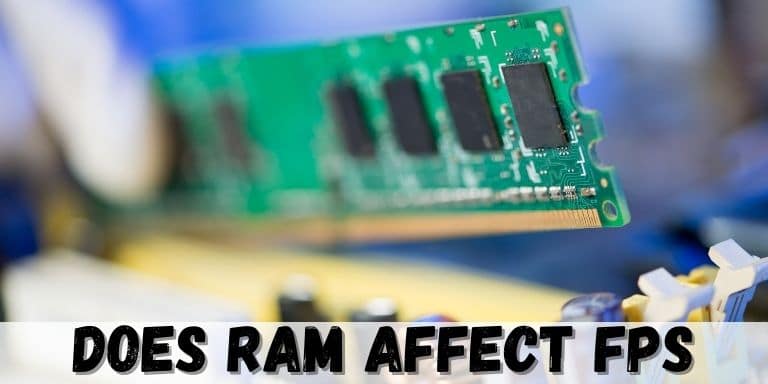 Unlike consoles, PC gaming requires frequent upgrades to improve the in-game performance, for it is a fact that computer gaming is highly customizable.

It allows you to have whatever specs you want to see in your game. In a similar context, one of the common settings to have impressive gaming is upgrading RAM.

With that aside, a common query among gamers these days is that does RAM affect FPS in gaming or not?

So to answer this question, we have an exclusive guide that would help you out with this matter.

On that note, let’s get down to it:

What Does FPS Have to Do with RAM?

To give a one-liner in this regard, having more RAM to improve the FPS of a game would only be beneficial when the game requires so.

To put it simply, if your game is giving its best at 8 GB, then there is no point in increasing RAM with the idea that it would enhance the game quality even more!

With that being said, let’s dig a little deeper in this regard and figure out all the aspects that determine the effect of RAM on fps.

Let’s get down to it:

If your computer has low RAM, adding more to it would increase the in-game experience. Say your PC runs with a Random Access Memory of about 4 GB, and your game’s responsiveness is at its lowest, then it’s crucial to add more RAM to it.

On the flip side, if your computer already has enough memory to run your favorite game with no infrequency, adding more RAM is of no purpose. For a game to run smoothly at 16 GB of RAM, adding 32 GB would go unused.

The same goes for FPS as well. The frame rate per second of a game would not entirely, but slightly be impacted by upgrading RAM – provided that the already memory equipment isn’t good enough.

Despite all of this, there is another point to be mentioned here. If you are running your game at maximum settings, more RAM would be required to tackle the responsiveness and the frames rate per second.

So if ever again the question, ‘does RAM affect gaming performance’ pops up in your mind, you need to check the requirement of your game. If it’s perfectly feasible with the built-in storage capacity of your computer, then better not spend money and energy on increasing RAM.

Related: How Much Does It Cost to Build a Gaming PC?

With all the points been discussed regarding the addition of more RAM to improve FPS, there comes the point of whether faster RAM alters frame-rate or not?

This condition also varies from game to game. However, to give an overview, the speed of the memory makes an impact on the overall performance. Having faster RAM increases the clock speed, which resultantly generates responsiveness from CPU and GPU while gaming.

Related: How Much Does CPU Affect the Frames-per-Second (FPS) while Gaming

Having said that, while upgrading your computer’s RAM, make sure that it is high enough to handle the system’s operations, apart from gaming.

It is a fact that RAM plays a crucial role in improving the overall gaming performance. From increasing FPS rate to managing to multitask, higher RAM encourages rapid operating. So much so that 16 GB would give its best in this regard.

It all comes down to the requirement of the game you are playing. If your game can give its best shot in 4 GBs, then using an 8 GB of RAM wouldn’t be a good option.

Similarly, if your game requires RAM up to 16 GB to give the best performance, there is no point in having huge memory.

In fact, most of the games work perfectly with 16 GB of RAM or less, so it’s rare to use 32GBs of it.

The RAM does make a difference in the value of Frames Per Second (FPS) of a game. However, there is a say of the requirement of the game as well in this. For instance, some games work best on 4 to 6 GB of RAM, which aren’t high-enough storage capacities.

So it turns out that FPS increases by increasing RAM, only if the game is heavy enough to need more memory space.

4. How does RAM affect gaming performance?

Instead of hard drives and other storage items, RAM is more preferable among gaming professionals. The reason is that it is a temporary storage space that makes room for fast and smooth game-play. In addition, it impacts the FPS of the game to some extent as well.

RAM temporarily stores the computer data that is to be read and received immediately. As the name suggests, the Random Access Memory allows easy and quick access to the programs, unlike the other storage drivers.

In addition to that, the computer RAM also plays a vital role in handling multitasking and intensive gaming.

6. How much does RAM affect fps in Minecraft?

The maximum range of RAM that can be good enough to run Minecraft smoothly is around 512MB-1024MB of RAM. More than that would have a similar effect, and the RAM in Minecraft normally increases the responsiveness instead of fps.

To wrap it all up, I would say that RAM has a slight role in altering the FPS rate of a game. As for a fact, that CPU and GPU are mainly responsible for maintaining games. Whereas, RAM comes last in determining the perfection of a game.

So that means it would be of no use to add RAM on a computer if the game doesn’t require that much memory space.