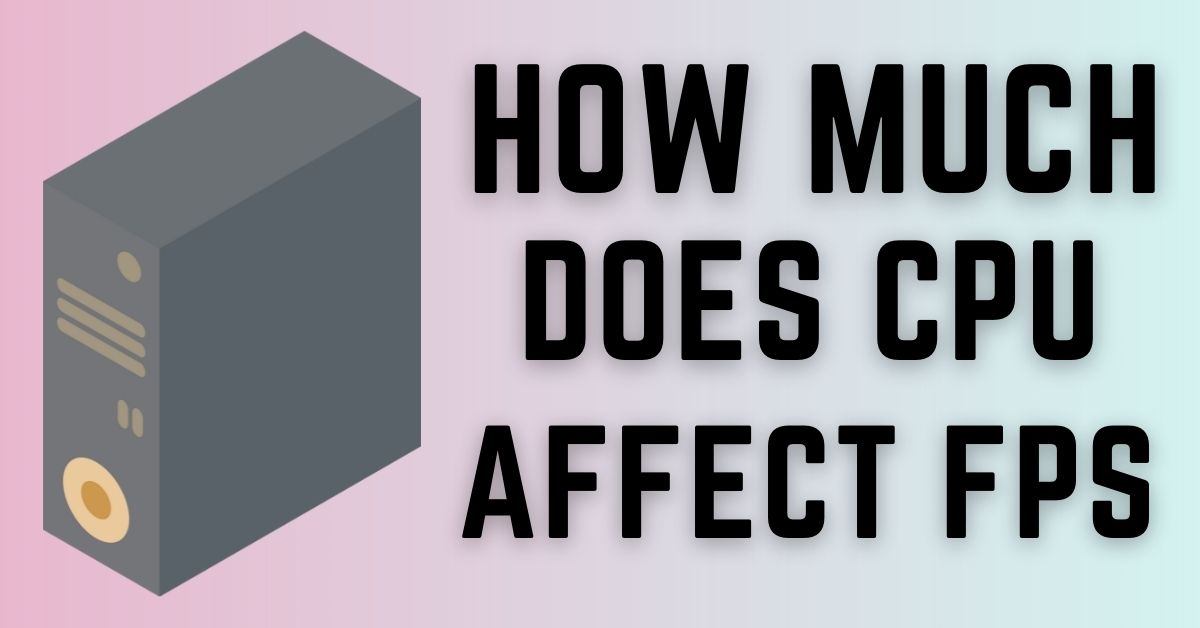 The CPU is the primary processing unit of your PC that provides all the processing power to your system. You might think that GPU takes all the load of gaming processing, but that is not the case.

The GPU does process higher graphics for a better gaming experience, but it relies on the CPU to provide it with the right information on what to process.

So, basically, the CPU is the component that reads and understands games and then tells the GPU how the game looks. Then GPU acts as an artist to draw the graphics for how.

A less powered CPU won’t be able to process the information quickly enough to the GPU, and hence you might face hindrance in gaming.

In this article, we are going to discuss in detail how a CPU will affect the FPS of your games and what role does it play along with the GPU in overall performance.

The impact of CPU on FPS depends on many factors including the type of game you are playing. So, let’s start there.

If you are playing a game that mainly relies on GPU, like most games, then you can play it with higher graphics even if you have a less powerful CPU.

There is a limit to that as well. If you go too lower on your CPU power, it will also cause a hindrance to GPU’s performance. Hence, your CPU should be powerful enough to support your GPU function to its full extent.

There are games that rely more on CPU performance than on the GPU. Hence, these games need more CPU power, so their FPS mainly depends on the CPU.

So, for those games, the CPU will greatly impact the frames per second of the game. For a better and enhanced gaming experience, you are going to need a more powerful CPU than the GPU.

These games include third-person-shooter games that require much more processing power as there is a lot more data to be processed.

To be on the safe side, you should always go with a good enough CPU. If you are building a PC for gaming, then you should go with the latest models of Intel or AMD, as they have more advantages and better features.

To What Extent Does a CPU Affect FPS?

Well, as I said earlier, the impact of CPU on FPS is limited to a certain point. After that point, even if you increase the power of your CPU, it’s not going to impact the frames per second of your game.

The reason is that FPS mainly relies on GPU, as this component is responsible for designing the visual graphics that you see on the screen. Hence, getting an over-powered CPU will only cost you more money.

This statement is true for FPS only, there are other processes that require more CPU power and hence will require you to have a better and more powerful processor. But, as far as the FPS is concerned the impact is limited.

So, to create a perfect gaming system you need to maintain a balance between CPU and GPU so that one doesn’t hinder the performance of the other. For the purpose of gaming, having a more powerful GPU with optimum CPU to support it is the best play.

GPU is the main component and overspending on it will improve your FPS a lot. The CPU will support and help your GPU in improving the frame rate up to a certain point, but after that, it’s all going to be the GPU.

Bottleneck—Why a Balance Between CPU and GPU is Needed?

A bottleneck is created when one component of your PC is too powerful for the other, and as result ends up hindering the performance of the other.

The same is the case for CPU and GPU. If you make one of them too much power, then they will end up bottlenecking the performance of the other. So, you need to maintain a balance between the two.

If you want to calculate your Pc Bottleneck you should try the Computer Bottleneck Calculator.

Let’s say you bought a really powerful GPU so that you can enjoy an Ultra-HD gaming experience with higher framerates, but it is paired with a cheaper CPU. In this case, the CPU won’t be able to provide enough data to graphically process and hence will end up bottlenecking its performance.

The same goes for the other way around. If you buy a powerful CPU but your GPU is cheap, then the processing speed of the CPU will be too much for GPU to handle and hence the GPU will end up bottlenecking the CPU performance.

From the above two examples, it is clear the balance between the power of CPU and GPU should be maintained so that you can achieve the highest possible framerates per second.

Well, in short, yes it does. If your CPU is becoming overheated that means it has a lot of workloads that are pushing it to its limit. Moreover, the absence of a proper cooling system can also cause the CPU to heat up.

Once your CPU heats up, it will need to be throttled and hence your FPS will reduce significantly. There are a lot of fixes to solve that problem and maintain your FPS.

The first is to change the processor fan with an upgraded one so that it can your CPU cool at all times. It will significantly reduce the risk of overheating.

There might be some third-party applications that you downloaded and are always running in the background. Restrict background access of the unnecessary ones. It will significantly reduce the load on your CPU.

CPU overheating is a serious issue that will not only impact your FPS but also can cause fatal harm to your system. If your CPU passes the heat limit and catches fire, it will end up ruining many components in your system.

How Much Should You Upgrade Your CPU to Improve FPS?

Upgrading your CPU definitely increases the FPS. Although to a limit, the generation and features of a processing unit are crucial to frame rates as well as the overall performance of your system.

Other Factors Impacting the FPS

Besides CPU, there are also many other factors that impact the FPS of your display to a great extent. The most prominent and impactful of these are GPU and display monitor.

The GPU is mainly responsible for all the graphic processing. The more powerful GPU you have, the better FPS you will get on your display, provided the CPU is powerful enough to support it.

The Display Monitor on the other hand is also important, as the FPS will be displayed on it. If your monitor isn’t equipped to display those graphics, you won’t be able to get the Ultra-HD gaming experience and will be forced to lower the settings to get a bit lower graphics.

Hence, you should keep these two factors in mind while building a gaming computer to enhance the FPS to the maximum.

How much will CPU affect FPS?

CPU does impact FPS, but the impact is limited to a certain point. After that point, spending on the CPU will go to waste in terms of FPS as no matter how much power you increase, the FPS will have reached a limit and won’t go any further.

Yes, the CPU affects these features. Having an advanced CPU based on one of the latest generations is crucial. Not only it will increase the FPS to a certain level, but also it will support the GPU for better performance and increase the FPS further.

Does a better CPU increase FPS?

Yes, having a better CPU increases the FPS of your display and provides you with better graphics for a 1080p gaming experience. However, the CPU can only increase FPS up to a certain limit, after that the FPS can only be increased by upgrading the GPU.

Overclocking your CPU pushes it to the maximum performance limit. If your CPU has the remaining ability to enhance the FPS, it will increase. However, if the CPU is already at the limit with an FPS number, then overclocking won’t have any further impact.

The CPU does impact FPS, but this impact is somewhat limited. You can only increase FPS to a certain limit by upgrading your CPU. We have shared detailed aspects of how different factors can impact the overall frame rate while gaming.

Have a go through them and then decide to increase the fps of your rig accordingly!